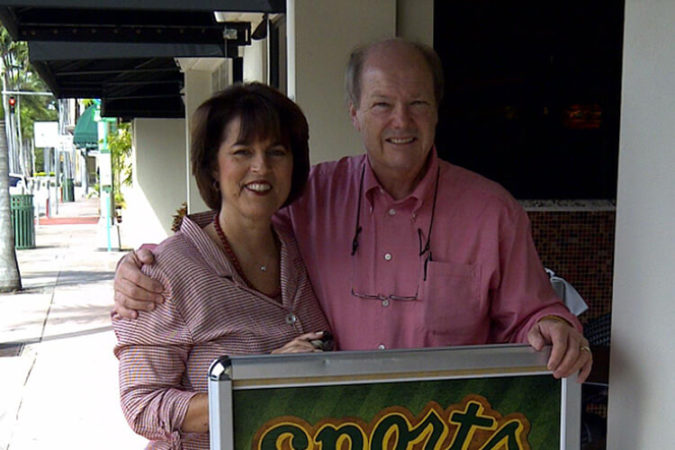 Born and raised in Miami Florida, Eric Haas received his BA in History and Broadcast Communications. He was initiated into Kappa Alpha Order and served as the president, at Mercer University, Macon Georgia. Working construction in a restaurant, over summer break, he became interested in the restaurant business. While based full time, in Miami, as a flight attendant for Eastern Airlines, Eric met his wife Lori, and together they opened the original Sports Grill on Sunset Drive in 1987.

Sports grill became known locally, for their “famous Special Grilled Wings” and their family friendly atmosphere. There are now six locations in Miami Dade County, and in 2014 they opened their first store in Broward County. Sports Grill has been participating in the Make-A-Wish Foundation since 2015 raising funds that achieved fifty-two “Wishes”. Sports Grill has also catered and participated in many community events over the past 30 years! Outside of Sports Grill, Eric has been a Diaconate at old Cutler Presbyterian Church since 1992 and was elected to the Board of Directors of the Deering Estate Foundation in 1998, and served as the president 2013-2014. Eric and Lori have two daughters and reside in Miami Florida.

Mike (Spike) Anderson has worked with Eric for almost 20 years, starting at the original Sunset Location and continuing to help with the development of the brand with the opening of the Kendall Location and other restaurants within the group. Spike is passionate about great customer service and ensuring our guests leave happier than when they came, our mission statement and an important part of the Sports Grill culture. Currently, Spike heads up the equipment development with a special focus on maintenance and equipment functionality while at the same time overseeing the catering operations and it’s development with proper execution and follow up. Spike holds a degree from the University of Miami and resides in Miami with his family.

Christine Marques joined the Sports Grill family in September of 2011 after 33 years with Burger King where she held various positions throughout her career that included operations, purchasing, training & development and global operations R&D. Christine had the opportunity to work internationally on several projects and operations teams including the implementation of a global ordering platform of toys for every Burger King in the world. Sports Grill South Miami was the first location she helped to open with Eric & Spike and quickly understood the power of the brand and the impact it has on the South Florida Community – making things Special Grilled and ensuring the best representation for the brand are paramount to our success. Since 2011, Christine, Eric and Spike have opened an additional 3 locations and have been redeveloping the menu and the branding along with a day to day focus on operations. Christine lives with her family in Miami.